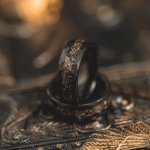 About the Dinosaur Bone:

This dinosaur bone was harvested from the Hell Creek formation in the US. Hell Creek Formation, a division of rocks in North America dating to the end of the Cretaceous Period some 65.5 million years ago. Named for exposures studied on Hell Creek, near Jordan, Montana, it occurs in eastern Montana and portions of North Dakota, South Dakota, and Wyoming. The Gembone that we use is from the predominant dinosaurs that are found in the area, which are the infamous T-Rex, and the Triceratops. The pieces are small, so we can not identify individual pieces, but they are all unique and beautiful, and range in colors from Orange to reds to blues.

Studies have shown it to be the oldest discovered meteorite impacting the Earth during the Quaternary Period, about one million years ago. It is quite clearly part of the iron core or mantle of a planetoid, which shattered into many pieces upon its fall on our planet.[5] Since landing on Earth the meteorite has experienced four ice ages. It was unearthed from a glacial moraine in the northern tundra. It has a strongly weathered surface covered with cemented faceted pebbles.

The Muonionalusta meteorite (Finnish pronunciation: [ˈmuo̯nionˌɑlustɑ], Swedish pronunciation: [mʉˈǒːnɪɔnalːɵsta])[1] is a meteorite classified as fine octahedrite, type IVA (Of) which impacted in northern Scandinavia, west of the border between Sweden and Finland, about one million years BCE.

The first fragment of the Muonionalusta meteorite was found in 1906 near the village of Kitkiöjärvi.[2] Around forty pieces are known today, some being quite large. Other fragments have been found in a 25-by-15-kilometer (15.5 mi × 9.3 mi) area in the Pajala district of Norrbotten County, approximately 140 kilometers (87 mi) north of the Arctic Circle.

The meteorite was first described in 1910 by Professor A. G. Högbom, who named it after the nearby place Muonionalusta on the Muonio River. It was studied in 1948 by Professor Nils Göran David Malmqvist.[3] The Muonionalusta meteorite, probably the oldest known meteorite (4.5653 ± 0.0001 billion years),[4] marks the first occurrence of stishovite in an iron meteorite.

The name Muonionalusta has Finnish roots: it comes from the name of the Muonio River (+ possessive particle -(o)n-) and alusta, meaning “base, foundation, stand, mat, tray”, thus probably “base of the Muonio”. “alusta” also means “from the beginning”, “starting point” which may refer to possible first finding places “Muonion alusta”, “from the beginning of Muonio-river”.

Lindsay Faber
Rated 5 out of 5
Great Value
Very comfortable! This ring is absolutely amazing! I got this ring for my fiancé as a wedding band and he loves it! It is absolutely flawless!! We adm...More

Very comfortable! This ring is absolutely amazing! I got this ring for my fiancé as a wedding band and he loves it! It is absolutely flawless!! We admire your creativity and appreciate you so much! Thank you!!

It's comfortable and I get compliments. People think it looks expensive. Hasn't scratched and still shiny

Helpful?
0 0
Anastasia King
Rated 5 out of 5
Way better then expected!

Helpful?
0 0
Marla
Rated 5 out of 5
Perfect fit and great quality

Beautiful, exactly as described and pictured. It fits him perfectly. Thank you so much!

Helpful?
0 0
Mrs. Spice
Rated 5 out of 5
Awesome quality
This ring is beautifully crafted. It looks like a very expensive ring. It has good weight to it and is true to size. I was so pleased with this pur...More

This ring is beautifully crafted. It looks like a very expensive ring. It has good weight to it and is true to size. I was so pleased with this purchase that I bought a second one! I have not taken it off since I received it. You will not be disappointed with the quality of this ring.

The band is a grate fit I love the coloring of it I recommend this band to any man that's looking for something different.

Helpful?
0 0
stephanie
Rated 5 out of 5
Gorgeous