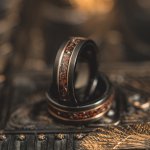 *Special Note- Supply is very limited on these, as this meteorite and dinosaur bone is old, and rare, so what we have is available, but while we will try, no future stock can be guaranteed on these, it depends what we can get, and when, and at what cost. We will not raise prices on current batch, but future rings will be priced based on material costs. This is another in a line of rings that we are really excited about. These rings include Muonionalusta meteorite, T-REX/Triceratops bones, and Mammoth teeth. To have a ring that includes materials that are millions of years old is very exciting to us, and we hope that you like them as well! About the Dinosaur Bone: This dinosaur bone was harvested from the Hell Creek formation in the US. Hell Creek Formation, division of rocks in North America dating to the end of the Cretaceous Period some 65.5 million years ago. Named for exposures studied on Hell Creek, near Jordan, Montana, it occurs in eastern Montana and portions of North Dakota, South Dakota, and Wyoming. The Gembone that we use is from the predominant dinosaurs that are found in the area, which are the infamous T-Rex, and the Triceratops. The pieces are small, so we can not identify individual pieces, but they are all unique and beautiful, and range in colors from Orange to reds to blues. About The Meteorite: Studies have shown it to be the oldest discovered meteorite impacting the Earth during the Quaternary Period, about one million years ago. It is quite clearly part of the iron core or mantle of a planetoid, which shattered into many pieces upon its fall on our planet.[5] Since landing on Earth the meteorite has experienced four ice ages. It was unearthed from a glacial moraine in the northern tundra. It has a strongly weathered surface covered with cemented faceted pebbles.The Muonionalusta meteorite (Finnish pronunciation: [ˈmuo̯nionˌɑlustɑ], Swedish pronunciation: [mʉˈǒːnɪɔnalːɵsta])[1] is a meteorite classified as fine octahedrite, type IVA (Of) which impacted in northern Scandinavia, west of the border between Sweden and Finland, about one million years BCE.The first fragment of the Muonionalusta meteorite was found in 1906 near the village of Kitkiöjärvi.[2] Around forty pieces are known today, some being quite large. Other fragments have been found in a 25-by-15-kilometre (15.5 mi × 9.3 mi) area in the Pajala district of Norrbotten County, approximately 140 kilometres (87 mi) north of the Arctic Circle.The meteorite was first described in 1910 by Professor A. G. Högbom, who named it after the nearby place Muonionalusta on the Muonio River. It was studied in 1948 by Professor Nils Göran David Malmqvist.[3] The Muonionalusta meteorite, probably the oldest known meteorite (4.5653 ± 0.0001 billion years),[4] marks the first occurrence of stishovite in an iron meteorite.The name Muonionalusta has Finnish roots: it comes from the name of the Muonio River (+ possessive particle -(o)n-) and alusta, meaning “base, foundation, stand, mat, tray”, thus probably “base of the Muonio”. “alusta” also means “from the beginning”, “starting point” which may refer to possible first finding places “Muonion alusta”, “from the beginning of Muonio-river”.

13 reviews for The Maurice

MG
Rated 5 out of 5
Happy Rings
I thought these for my husband so when he works in his shed or outside. They look nice and he doesn’t have to worry about getting his ring caught on s...More

I thought these for my husband so when he works in his shed or outside. They look nice and he doesn’t have to worry about getting his ring caught on something and hurting his finger

Fit perfectly, and arrived before Christmas

This was a fun stocking stuffer for my husband! He put the black on right away. He loved them!

Helpful?
0 0
vicki stalnaker
Rated 5 out of 5
Perfect for the working man!
My husband was never able to wear his wedding ring because he is a mechanic, this ring is perfect and it is not dangerous for him to wear while he is ...More

My husband was never able to wear his wedding ring because he is a mechanic, this ring is perfect and it is not dangerous for him to wear while he is working. It fit very nicely and is very comfortable.. he loves it!!

Nice ring. Wish I would of sized up to 8.5-9 though bc its a little snug. Other than that he loves it!!

Helpful?
0 0
Margie Bush
Rated 5 out of 5
Knock around ring
Ring fits as advertised and is durable. Husband works in the restaurant business and this ring doesn’t get hot while he’s cooking or slip off when his...More

Ring fits as advertised and is durable. Husband works in the restaurant business and this ring doesn’t get hot while he’s cooking or slip off when his hands get sweaty. He likes it very much.

Helpful?
0 0
David Clauson
Rated 5 out of 5
Love the ring

Nice ring... working with my hands I needed a ring that wouldn't get destroyed.

Nice ring. Also thank you for the great customer service. Would buy again in the future.

Helpful?
0 0
Donald westcott
Rated 5 out of 5
Fast, easy service
A great ring at a great price. I ordered the wrong size and contacted the company and they gave me a fast response and replaced it free of charge. I'd...More

A great ring at a great price. I ordered the wrong size and contacted the company and they gave me a fast response and replaced it free of charge. I'd recommend these rings and thunderfit to everyone.

It’s a cool ring. More flexible than I thought it would be. Sadly I ordered a ring that was a little too big so it’s sliding off my finger.

Been wearing it for a few months now. No rips/tears, over stretching, and doesn't feel like its too tight on the finger.